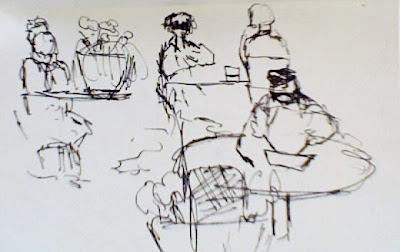 The city has crept into my art. Chance encounters and special connections with strangers have me captivated right now. People I'll never see again, yet somehow meeting them is significant.

The sketch above was done at my favorite cafe. The Art Gallery restaurant opens up to an umbrella covered roof top garden where they play jazz or classical music and the little birds come and steal leftovers before the plates are cleared.

As soon as I walked out onto the roof top, I felt Mr. Charisma. He owned the roof top, and nobody minded. He filled the space with a pleasant confidence. I was so excited by the energy coming from him, that my hand moved overly quick and pretty much scribbled his face. He's the blob at the back with the mop head and the black is his sunglasses.

This sketching people in public is new, I'm still nervous about it, and was trying to be discreet. There was also an interesting man with a cap and that looked like captain Highliner with a brown suede jacked and a woman with her hair piled high that seemed a little sad to be eating alone. Maybe a 'Miss Pettigrew' type?

I drew the above scene in one minute then hid my book, but it wasn't enough. I had to capture more of Mr. Charisma. Between bites of quinoa salad I snuck in another sketch careful to not be seen. 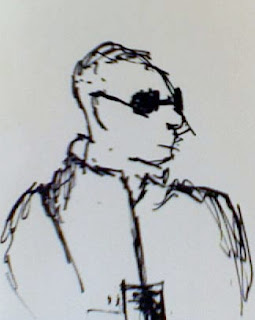 Even though I was 15 feet away, and was being discreet, eventually he sensed it and turned his body towards me. He felt open, friendly and curious, pleased with himself, calm. He was inviting the interaction. And I panicked, overwhelmed with shyness and left. When he and his companion got up to leave shortly after, I hid in the gift shop.

I know, that's not the way it should end. I should have boldly interacted with the stranger. Eventually I want to, but I'm not ready yet. Vancouver isn't like a lot of big cities. People aren't as wary of you being crazy. They're more open to strangers. J and I went out to eat at the best Greek restaurant in town and I sketched more people there last night.

I messed up recently by taking my blog roll off when reorganizing. I thought I'd be able to put it back again, but all the links were lost so I'll be putting those back together in the next few weeks.
Posted by Shayla at 5:23 p.m.

It sounds like you are having fun Shayla. I particularly like your drawing of Mr. Charisma. Do you know Lynn's blog? She also sketches in coffee shops.... etc.
http://lynn-nonameblog.blogspot.com/

That openness to craziness and the proliferation of oddball people roaming the streets is one of the many things I miss about Vancouver. I used to like sketching in the sit-down eating area of the Granville Island market. It's so crowded and busy, people so intent on their food, kids, packages, etc. that no one even notices that you're staring at them and making marks in a small book.

Mr Charisma is a hoot. I love these little drawings; they are like handwriting - so personal in style and substance.

VERY FUN, Shayla... and I like the little stories with these characters along with their sketches! Vancouver sounds the ideal city--big city flair and wealth of offerings, but also very approachable. A city to be alive and crazy in and accepted for that... I love it! Do share more... love learning about your new place. Happy Days, my friend ((HUGS))

Thanks, Robyn. She has great stories and character in her drawings. Much appreciated!

Lynn- what a fab tip, and of course you're right!! I never even thought to take my sketch pad there. Bonus, can stop at Opus for art supplies :D

Patrice- thanks. I think you would have liked him ;)

Tracy-yes, you've got the vibe right. There's so much freedom here.

Your drawings reflect the exciting new you that is emerging in this new place, Shayla! Look forward to seeing more sketches and finding out when you stop exiting via the gift shop ;)

Shayla
I'm a former finance manager turned artist with a day job in a non-profit in the cultural sector. I believe in freedom, imagination, and living an expanding life with joy and I just moved 6000 km across the country to do just that. Our new home in downtown Vancouver has ocean and mountain views, and palm trees grow here. A big change from 90 cm of snow winters. I am head over heels in love with this place. Woo!

Artwork Published in "The Pulse" 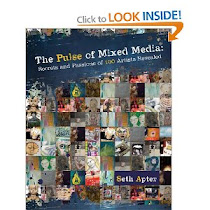 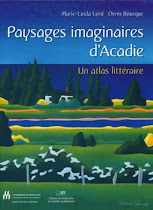 "Creative Everyday Challenge" featured one of my paintings